News > MWF-News > Why Use Fungicides and Insecticides?

Why Use Fungicides and Insecticides? 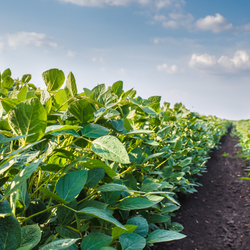 It is always interesting to reflect on the changes in agriculture over the past 20 years. In addition to the advancement of technology, management of crops has dramatically increased efficiency on the farm. It wasn’t long ago when spraying wheat with a fungicide was only occasionally done and was not widely adopted. Now 20 years later, spraying wheat with fungicides is common and returns great results for growers. As agriculture advances, more research has been done on the impact of spraying fungicides and insecticides on soybeans.

In addition to fungicides, insecticides have become a common practice on the farm. It's not uncommon to check soybean fields for Podworms around this time, but one insect that we don’t talk about enough is the stink bug. The stink bug is a piercing/sucking insect and will pierce the soybean pod during the development stage of the soybean. When this happens, the soybean will not develop, and you could lose the seed. At harvest, the soybean pod that should have been a three-bean pod only has two beans. There are times that the threshold for one single insect is not high enough to spray, but we need to look at the total insect population in the field. When we add the pressure of all insects together the RIO on the application of an insecticide will be positive.

If we are making the application to control the Podworms, Stink bugs, and Loopers, we should be looking at adding a fungicide to the mix too. We have seen fields of wheat that were sprayed with a fungicide but did not have much disease pressure. This year, we saw fields like this with a greener healthier plant through the dry periods after applying fungicide, even if there was not disease. When a soybean plant is under stress, the soybean response will drop pods or abort flowers. The fungicide is there to help the plant retain pods and flowers through the stress period.

Later this summer we should be on the lookout for insects and put together a plan to control them. Adding a fungicide to the application has shown to provide an excellent ROI for the farmer.  While it is not currently a common practice for soybeans in our area, that doesn’t mean that in a few years we won’t look back and think how the management of soybeans has changed.

Jan 19,2023
Every corn hybrid has a level of natural resistance to certain diseases and plant stresses. Understanding that level of resistance for each corn hybrid you plant can improve your ROI and positive returns on corn fungicide investments.
Nov 23,2022
The timing of application of Phosphorus (P) and Potassium (K) in a granular form can be crucial to your farm’s success. Applying P & K in the fall could bring many benefits to your operation. ​
Nov 17,2022
When you think back to farming just four decades ago, it makes you realize just how far agriculture has come. That is why one Mid-West Fertilizer customer is investing in new technology to help solve current issues in the industry and pave the way for future farmers across the U.S.