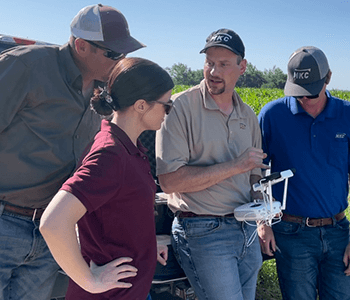 Drone technology has advanced tremendously the last few years and the benefits of drones on the farm is becoming more and more visible. Drones specifically made for agriculture give us the opportunity for mapping, surveying, spraying and crop dusting.

Instead of taking photos in a corner of the field to asses crops, drones allow for an aerial shot of the entire field. In addition to taking photos, drones can provide an in-season, field health assessment by detecting drought stress, nutrient deficiencies, weeds, perform stand counts and more.

Ag Technology Manager Ross Benisch said, “We use the drones to help us get a better analysis of the field. The drones use different sensors to detect stress and problems more than what we can detect from just walking through the field.”

As the drone is in flight, it automatically takes photos of the field and uses a GPS system to determine when to take each picture. Once the drone is in the air, the operator’s job is to monitor the drone’s flight and make sure it collects all the necessary data.

Once our team has collected the data, the images are uploaded to a software and analyzed. The drones produce high-resolution, georeferenced images, which allows our team to zoom in and out of the photo to get a better view of specific problems.

“The overall benefit of utilizing drones is that we’re able to look at an issue in the field and distinguish if it’s a man-made problem or not. It gives us the opportunity to fix the issue, so we don’t repeat the problem,” Benisch said.

The idea of utilizing drones in the Mid-West Fertilizer footprint is relatively new, so for now, drone usage is primarily for learning opportunities, such as looking at test plots to collect data.

To get comfortable with the technology, Benisch and two precision ag team members set out to practice running the equipment and to look at test plots in the Thayer, KS, area.

Flying over three fields, the team members were able to learn first-hand how to operate two drones: DIJI Phantom 4 Pro and the Sentera PHX.

“The DIJI Phantom 4 Pro is a quad copter style, which is easier to fly and is typically used for a small number of acres,” Benisch said. “The Sentera PHX is used to cover more acres, faster.”

The Sentera PHX allows the team to do stand counts to determine if replanting is needed early in the season. It can also do tassel counts later in the season to help with yield estimates.

Benisch added, “When we spend time learning how to use a new piece of technology, we are able to look at traditional agriculture practices from a new perspective that perhaps allows us to use innovation to understand things differently which makes working with technology very fun and exciting.”

Nov 23,2022
The timing of application of Phosphorus (P) and Potassium (K) in a granular form can be crucial to your farm’s success. Applying P & K in the fall could bring many benefits to your operation. ​
Nov 17,2022
When you think back to farming just four decades ago, it makes you realize just how far agriculture has come. That is why one Mid-West Fertilizer customer is investing in new technology to help solve current issues in the industry and pave the way for future farmers across the U.S.
Oct 25,2022
Every producer is aware of the supply chain disruptions and product shortages that the entire agronomy input ​sector has been battling for over two years. Could there be changes in 2023?