News > MWF-News > Investing in the Future

Investing in the Future 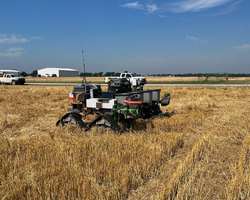 One thing that never changes, is that things change. New challenges continue to drive farmers to become more efficient and productive than ever.

When you think back to farming just four decades ago, it makes you realize just how far agriculture has come. From planting with an open cabbed tractor pulling a four-row planter, to now using a 16-row planter with GPS, farmers have continued to pioneer new ways to face challenges and increase productivity.

That is why one Mid-West Fertilizer customer is investing in new technology to help solve current issues in the industry and pave the way for future farmers across the U.S.

Kevin Stark owns and operates Muddy Water Farms in Hammond, KS with partners Dave Carney and Mike Vande Logt. Together, they have 3,500 acres of farmland where they grow corn, soybeans, wheat and forage sorghum.

The partnership between Stark, Carney and Vande Logt began in 2008 and grew into what it is today after realizing they shared the same passion for agriculture and the future of the industry.

Like many farmers across the nation, Muddy Water Farms was feeling the pressure of labor shortages, planting costs and market disruptions.

In the winter of 2021, Vande Logt approached the partnership about the potential of investing in a new technology that could provide relief from some of the major challenges farmers were facing.

Shortly after, Muddy Water Farms became the newest investor in Salin 247, a lightweight four-row autonomous planter, with capabilities of side-dressing nitrogen and applying herbicides, insecticides and fungicides. Salin 247 is owned and operated by Dave Krog of Iowa.

“We chose to move forward with investing because it seemed like a solid concept of technology and most of the investors were just like us, farmers,” Stark says. “I knew we could learn something new from this technology.”

As Salin 247 continues to develop, the team performed tests in Iowa, Tennessee and eventually Kansas. Muddy Water Farms was the first test site in Kansas where it planted five acres of soybeans on a double crop field following wheat.

“When they tested the machine in Iowa, it worked great because the soil is soft and flat,” Stark says. “When we tested in Kansas, we found a few improvements that needed to be made, but that’s why you do these prototypes.”

While the technology is still in its early stages, Stark has high hopes for its use in the future.

“There are a lot of advantages that resonated with us,” Stark says. “Instead of having a 16-row planter, you could have six four-row planters working together. The equipment cost would be about 30% less when compared to a planter and tractor.”

“Other advantages are that you can start a couple days earlier or go a couple days past when you would want to put a ground rig in the field,” Stark says.

In Kansas, many farmers face weather challenges. Heavy rain can prevent them from accessing their field with planters or spray rigs. Salin 247 would be able to access fields when large equipment cannot.

Less soil compaction is also a major advantage to the team. Large tractors and spray rigs can cause soil compaction on fields, resulting in less ability for the soil to supply water and nutrients to the crop, reducing yields.

“The soil compaction is pretty significant under a tractor,” Krog said in a recent interview on Farm Next. “The yield reduction from soil compaction is probably in the 10-20% range. We think with smaller equipment, we can help farmers increase their yields and make more money.”

Among several challenges farmers have faced in recent years, labor shortages, production cost and yield losses are all reasons why Muddy Water Farms took the leap of faith to invest in a new innovative technology that could potentially benefit their operation in the future.

“The thing about the future is we don’t really know exactly what the end game is going to look like, but there are pieces that if we put them together, could be a really nice addition to our operation,” Stark says.

He adds, “why would we want to stay on the sidelines and gripe about something not working when you could be a part of trying to make it practical?”

“We make small investments today, so we can see where that technology is heading in hopes to bring it to our member-owners as soon as they’re available on a commercial basis,” Erik Lange, executive vice president and chief operating officer at MKC, says.

In the past year, MKC has invested in two technologies that have potential to deliver big impacts to member-owners. One of those investments is the use of Rantizo Drones. These drones have the ability to apply product in place of spray rigs. The vision of these drones is to fly in groups of three and maybe some day twelve or more to allow for a more precise application and to apply products to areas spray rigs traditionally won’t fit.

"The technology isn’t quite there yet, but if you think about spray rigs 30-40 years ago compared to the rigs today, that change has been immense,” Lange says. “We see the time frame it takes to develop and commercialize technology continue to shrink, so making early investments in those technologies, allow us to adapt quickly and bring those investments to your farm.”

The other technology MKC has invested in is robotic control of weeds, otherwise known as the Weedbot by Greenfield Robotics. Autonomously, these bots can mow weeds down, similarly to a weed eater.

“The time frame that it takes to see emerging technologies go from idea to application continue to accelerate. While Greenfield Robotics' technology might not quite be commercially ready today, it is very possible that in just a few short years it could disrupt how we manage weed control for row crops,” Lange says.

Other investments MKC continues to improve on are physical assets that allow member-owners ease of doing business and creating employee trainings to improve employee’s knowledge of products and processes.

Continued innovation throughout MKC and the farming industry will pave the way for the future of agriculture.

Nov 23,2022
The timing of application of Phosphorus (P) and Potassium (K) in a granular form can be crucial to your farm’s success. Applying P & K in the fall could bring many benefits to your operation. ​
Oct 25,2022
Every producer is aware of the supply chain disruptions and product shortages that the entire agronomy input ​sector has been battling for over two years. Could there be changes in 2023?
Jul 08,2022
It wasn’t long ago when spraying wheat with a fungicide was only occasionally done and was not widely adopted. As agriculture advances, more research has been done on the impact of spraying fungicides and insecticides on soybeans.